Although Coffee is the most popular beverage in the world, most people don’t know much about their morning cup of coffee. While coffee comes in a many different varieties, flavors, roasts, and growing conditions; most people don’t know that the vast majority of coffee comes from two basic types of plants. Arabica and Robusta plants make up basically all of the world’s coffee supply. Here we take a look at the differences between these two types of coffee.

To gain a full comprehension of the coffee varietals (varieties), it is important to start with an understanding of the biology and history of the plant. Coffea is a genus of the Rubiaceae family. It is a flowering shrub that generates the fruit called cherries. Inside the cherry are the two seeds erroneously called the coffee “bean” from which the drink coffee is extracted. The two commercially important species of the Coffea geneus are Arabica and Robusta. While there are many other species like Liberica, Excelsa etc exist, they are not commercially successful for different reasons such as insufficient yield, difficult to cultivate, or prone to diseases etc.

Coffea Arabica is one of the many species that is believed to have been indigenous to Ethiopia. Initially, according to history, herders mixed fruit of the plant with animal fat and used the concoction to nourish themselves during their long travels. African slaves carried the seeds of Arabica plant to Yemen where a tea was made from the cherries and their stimulating effects realized. Systemic cultivation of coffee took hold in Yemen for the first time and from there the rest of the world was introduced to this amazing beverage.

From the plants growing in Yemen, some were taken by the Dutch and planted in Indonesia on the island of Java. Since coffee had become such a sensation by this time one plant was even given to the King of France as a gift. The tree was planted in the King’s botanical garden. The original plant had died, and another one replaced it. Scientists in the botanical garden propagated more trees from the one that took root.

Different varietals of a plant species, and coffee is not exception, tend to occur naturally as a result of chance mutations and human intervention. Clipping from the French coffee plant, which became known as the “the Noble Tree” were taken to South America as well as to the island of Bourbon (not to be confused with the drink!) by the French. Offspring of the Noble Tree are classified as the “typica” variety of coffee plant.

A second important variety that developed out of Arabica species is known as Bourbon (after the island where it was discovered) and is said to be a natural mutation of the Typica. It is from these two varieties that most of the other commercially successful varieties that we consume now have been developed. 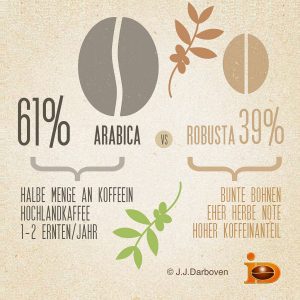 Arabica makes up for roughly 61% of the world coffee production. This is because the drink produced from these plants is highly aromatic and sweet. Chocolaty, fruity and nutty flavours with slightly acidic tones show up well in Arabica coffees.Their highly sought after taste qualities means the varietals of Arabica coffees sell for the highest prices. Unfortunately Arabica plants are prone to the leaf rust disease which has pushed coffee cultivators to search for new varieties that are more resistant to disease.

The good quality Arabica plants prefer high altitudes with steep terrain and hence are grown at altitudes ranging from 2,000 to 6,000 feet above the level of the sea. The plants also prefer temperatures of 60 – 75° Fahrenheit with around 60 inches of rain annually. The trees can’t withstand heavy frost and their yield per plant is not very high. The difficult access, susceptibility to disease and low yield makes the Arabica varieties more costly to cultivate.

There are many varietals of Coffea Arabica tree. Some of the better known include the following:

The Robusta species was not discovered until 1898; it too was found growing wild in what is now known as Zaire (originally Belgian Congo). The species was named after the Belgian horticultural house that initially marketed the species at the start of the 20th century. The name also indicates the more hardy nature of the plant itself and the greater “kick” the beverage produced from it delivers. 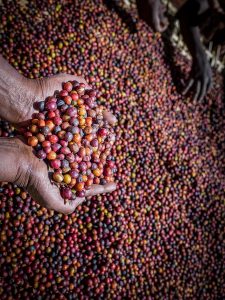 The Robusta plant is more robust and better able to resist disease. It also better at tolerating warmer climates with tempertures of 75 -85° Fahrenheit and does not require steep slopes or high altitude to grow. Additionally, it produces a significantly higher yield per plant compared to Arabica. These facts make it cheaper and easier to cultivate.

Sadly the taste profile of the Robusta is not very desirable. It delivers around 50% more caffeine than Arabica and produces a drink that is bitter with a taste like burnt rubber. It also lacks the fruity or nutty tones, thus making it undesirable for specialty coffee. Robusta is mainly used in blends and instant coffees. It makes up roughly 30% of the total world supply of coffee.

While Robusta does not make as great a cup of coffee as Arabica on its own, it has carved a place for itself in the coffee world. It is a vital component of some of the most exclusive Italian espressos. In an espresso machine, Robusta coffees are prized for the thick crema they deliver. This is why in the very best Italian espresso blends Robusta has become an essential requirement.

Even though there are no significant Robusta varieties to speak of, some extremely expensive Robusta coffees are produced.. Kopi Luwak from Indonesia and Kapeng Alamid from Philippines are Robusta coffee beans which are consumed by the common palm civet (something resembling a cat), and pass out of their system undigested. Passing through the animal’s digestive system imparts some very special flavours to the beans.  These beans are collected and marketed.

Origins Liberica:
The Liberica species originates from Western Africa. Liberica trees tend to be strong trees that grow to become rather large. They produce seeds that are boat-like in shape and are larger than the oval Arabica and round Robusta seeds. Liberica makes up less than 2% of the world coffee production.