The ability to froth milk properly means specialty drinks like latte, Cafe Au Lait, Mochaccino, Cappuccino, Macchiato and scores of others can be created at home. However producing that thick, sweet, lustrous froth requires patience and the ability to master the technique. Furthermore, creating that desirable froth manually, takes time and leaves a number of pieces of equipment that must be washed. The Starbucks Verismo Milk Frother aims to makes the job a little easier for every day coffee lovers that wish to add a barista flair to their cup of java. Let’s find out how it well it tested.

Before we get started, I want to point out that there is an older, discontinued model of the Starbucks Versimo Frother called the Electric Milk Frother. The design included a handle an a pouring spout. This is not the model I tested, and I have never owned one previously. The model below is the updated, current design which has been on the market for quite some years now. I would not suggest to get the old model due to warranty being expired. It is also limited to hot milk frothing only.

This handy little appliance warms up as well as froths milk with the push of a button in just 90 seconds. Warm milk adds to the taste of coffee drinks while the frothing not only adds taste but makes drinks more appealing when it is used as a dressing on top. Both types of milk are utilized in different ways in milk or coffee based beverages. Frothed milk has lots of volume because of the air that is infused into the milk and for the same reason is light and fluffy. Generally, the volume is increased by three to four times the volume of milk that you start with. Steamed milk has very little air worked into it so tends to be heavier. It can be purchased separately as a stand alone unit, or as part of the Verismo System, which includes a Starbucks pod coffee maker.

The exterior of the jug is plastic while the inside is metal lined with non-stick material. This means cleaning is a breeze. All that is needed is a quick rinse provided you do it as soon as you finish using it, before milk has a chance to dry up. Otherwise the use of a scrub brush may be necessary. The aim of automatic models like this one is to enable everyone to quickly enjoy froth. Beginners often get frustrated with traditional steam wand frothers. It’s likely for first time frothers to heat the milk up too much and cause it to burn and crust on the sides. It’s not uncommon to burn the milk on your first couple of attempts on a manual steam wand. The Starbucks Verismo frother takes away the difficulty by using a stirring whisk mechanism attached to the lid, matched with a timer and thermostat to avoid burning the milk.

The device is very easy to use. A peek inside the jug shows two markings. These indicate the quantity of milk that can be added for frothing and ranges from four to a maximum of six ounces of milk.  Unfortunately, the amount of milk is very limited for frothing, making just enough for one to two cup servings. If only warming the milk is desired, then the maximum amount the jug can hold is eight ounces. Once the desired amount of milk has been added for frothing, just position the frothing tool in the designated spot on the lid and place the lid on the jug. Press the button at the base of the jug and allow the magic to happen. When the froth is ready the unit will automatically turn off.

If you want to heat the milk and not froth it as much for drinks like lattes, simply remove the wire whisk attachment from the bottom. It comes off easily, but be careful not to pry on the plastic while removing the wire disc. The wire whisk is suggested to be used for maximum froth content for beverages such as cappuccino. For cold frothing, you simply need to hold the power button down for 3 seconds instead of 1, and the device will not warm up before spinning.

A small majority people who have used the Starbucks Verismo Milk Frother rate it negatively and give it very poor comments. Many of the negative reviews reported the milk temperature and froth to be inconsistent, but some of this feedback can be due to the milk. Even fresh milk can produce bad results due to having low protein content. More notable reviewers complained that their device failed after as little as a dozen uses. The limited warranty is good for 1 year, but falls short if the device has a high failure rate. Finally some users report that non-dairy products such as almond milk just don’t froth well with the Verismo. Although varied results are to be expected, the device does state it can froth non-dairy products.

The other lesser half of reviews reported they find it easy to use, convenient and are happy with the quality of the milk froth it creates. The removable lid with stir stick makes it easy to spoon out the froth, and washing it is quick.The only drawback of the jug has to do with the small quantity of milk it holds. With the large amount of air that is infused into the milk, the jug fills up quickly, with danger of overflowing if care is not taken and the maximum fill line is crossed. So if you want to make three or four cappuccinos, you have to run the device twice. However, considering that it takes under two minutes to froth, this is not a major flaw, but it does require a minute or so to cool down after running under cold water. 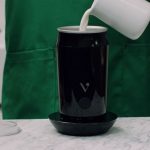 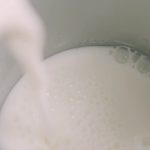 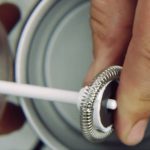 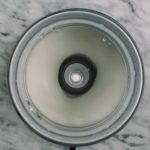 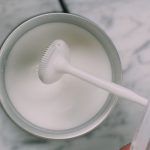 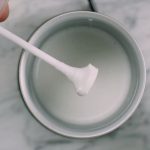 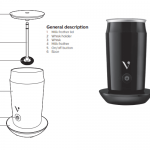