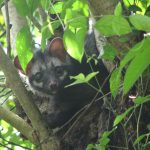 “The World’s Most Expensive Coffee”, I know; the very phrase conjures images of celebrities gathered in opulent rooms; to sip nothing but the finest beverages in sheer elegance. But what is the world’s most expensive coffee? No, it’s not Starbucks, but good guess. The truth is actually much stranger, and involves this adorable Asian forest cat you can see to the right of the page.

What is The Asian Palm Civet?

So you’ve gathered by now that “Cat Poop Coffee” is a gross oversimplification. What is there to this coffee? Why is it the most expensive? And just how expensive is it anyways? Well, none of those questions can be answered without first learning about the main player in this whole process, the Asian Palm Civet. The Civet is a small cat which is native to the forests of South East Asia but can live in a broad range of habitats. In fact, they are found in many countries and Civets were often seen as a nuisance because they would get into areas humans didn’t want them too, eat food, and make lots of noise at night. They are omnivores, which means that in addition to eating the red coffee cherries that have made them famous round the world, they eat a wide variety of food from nuts and berries, to mangoes and insects, and even small mammals. As such, they play a very important role in the ecosystem of the forests by spreading seeds in their droppings; not unlike raccoons in North America.

What is Kopi Luwak?

“Ok, what does this have to do with coffee?” As we learned above, Civets eat coffee cherries. Now Look, before I go on, and I hate to do this to you but … I need to break one of the biggest misconceptions about coffee beans… They’re not beans at all. I know it’s shocking! It’s a term so pervasive we’ve all come to accept it as true but the fact remains that coffee does not come from beans, it has nothing to do with beans. What you’re actually drinking is made from the seed found in the middle of a coffee cherry or berry which is actually quite sweet! The seed is removed from the berry/cherry and roasted into the familiar “beans” you’ve come to know as coffee. I’m sure you can see where I’m going with this. The Civet in essence, takes care of that first part of the process; it eats the cherries and is nice enough to leave us the precious coffee seeds behind in its waste. Farmers then pick the droppings up off the ground, clean, roast, and package the coffee. Here’s a video of the entire process from pooper scooper to cup.

Why Is It the Most Expensive Coffee in the World?

To put it simply, it’s really rare, exceedingly rare. Think about, there’s only so many civets in the world, and they eat many things in addition to coffee; so it is obviously not that easy to come by. It’s estimated that there’s less than 1,000 pounds of authentic, wild Kopi Luwak produced all year. Compare that to World’s total coffee production 8,460,000 tonnes per year. So, yeah, it’s exceedingly rare.

There’s also something to be said about the quality. Many farmers will tell you that the coffee is better for two main reason. Number 1, the Civet is presumably picking nothing but the finest cherries to eat, and as such, you’re getting nothing but the finest seeds. Additionally, the seeds are said to undergo a fermentation process within the body of the small creature. Here, the civet’s stomach enzymes digest the seeds just enough that it’s said to remove much of the acidity and produce a much smoother finish. Each makes sense; whether it’s true remains to be proven, whether you believe it or not is for you to decide.

Ok, But Who Decided Poop Coffee was a good idea? Well, legend has it the method was first devised by native plantations workers working in the coffee fields of Indonesia. At the time, plantation owners would refuse to let the workers have any of the coffee beans, taking any was strictly forbidden and punished. The workers eventually realized that they could get their hands on the seeds from the civet droppings and the product soon became popular among the natives. Once the plantation owners got wind of what was going on, they also wanted their share of the delicacy, and the rest is history.

How Much Is Kopi Luwak?

That depends how much you’re looking for but it’s no exaggeration to say that it will cost 15 to 20 times more than what you’re paying for the average cup of joe. Where the average cup of coffee will typically cost you from 2 to 5 dollars, a cup of Kopi Luwak can cost you anywhere from 40 to 100 dollars per cup! Ok, but that’s if you’re buying it in some chic cafe, what about if you’d just like to brew it at home? In that case, there are several reputable suppliers on Amazon who typically sell packages of around 100 grams (about 10 cups) for about 60 – 90 dollars depending on the brand.

Buyer Beware! The market for this niche product has become so large that many people have resorted to marketing fakes as the real deal. In fact, Indonesia even has a brand of regular coffee name Luwak, which popped up after the authentic version started to become popular. Some resellers will take this ordinary coffee and try to pass it off as the real thing for a huge mark up. There’s a great book on the subject if you’d like to know more.

Unfortunately, like any other industry, there’s an ugly side to Kopi Luwak. Let me preface this by saying that authentic, wild Kopi Luwak would be considered ethical by even the strictest moral code. It is after all, just picked up off the ground. The animals aren’t stressed in any way and in fact, aren’t even around during harvesting; the coffee farmers simply gather it off the floor of their plantations.

Unfortunately, where there is profit, there is often profiteering. Once this coffee started to become popular, many people saw an opportunity to maximize profits. Suddenly, civets were being caged and fed exclusively coffee cherries. The animals reportedly showed psychological effects like aggression, erratic behavior, and in some case would even cause themselves injuries. It’s a terrible practice that has cast a cloud over an otherwise reputable product. That’s why we always stress the importance of finding reputable producers who have measures in place to prove that no caged civets are being used. It’s possible to tell wild Kopi Luwak from caged because the animal’s diet is so different in each of the scenarios and it shows up in the stool. The best producers are independently verified to be using nothing by humane, wild Kopi Luwak.

Additionally, measures are in place so that those despicable people who need a selfish reason to not cage animals also have an incentive to comply. Firstly, caged Civets are said to produce inferior coffee as the cherries obviously don’t undergo the same rigorous selection process given that the Civets don’t have access to the rest of their typical diet. Secondly, a system has been put in place where verified Wild producers will receive upwards of 10 times the amount of money a non verified producer would. This gives the producers a very real cash incentive to stay on the right side of morality. There are also production caps imposed on producers so they don’t feel the need to resort to unnatural methods to increase output.

In closing, I’ll leave you this video of people trying Kopi Luwak without being told its origins until it’s too late. They react exactly as you’d imagine.

Related Articles
We will be happy to hear your thoughts